As many of you may, or may not know, Google just recently announced that they had decided to pull Authorship photos from the search results. One of the most obvious questions asked within the community of site owners, SEO’s and other online marketing professionals was, “Why?”

Well over the past month or so, there’s been quite a bit of discussion going around about why Google decided to do this, and without anyone really knowing for sure (regardless of what Google might tell us) I wanted to share my thoughts on the whole fiasco, along with some reasons why I believe they pulled it – as well as throw in some other crap for entertainments sake.

1. Google cares about ad revenue, not you or your crappy website.

There, I said it.

This might sound pretty harsh, but the truth of the matter is this – when someone has the opportunity to be distracted by your smiling face showing up in the SERPS, they then have the opportunity to click on something else apart from paid ads.

This means = no clicky on ads, no interwebz monies for the Googz.

This is simple conversion stuff 101. Fewer options always convert better than more. Think of it as taking a 5 year old into an ice cream shop where there’s only 5 flavours to choose from, as opposed to 50. Less is always more in the online world, and when you give users the opportunity to click on 10 things, when you really only want them to click on 1, that gives you a 90% potential failure rate. Nobody got time for that.

In any case, if someone is clicking all over your face, that’s lost clicks on zero income streams for Google.

Then we’d all be stuck using Bing, and nobody wants that.

2. Authorship was introduced merely as a way for Google to harvest publisher information.

Think about it for a moment. Why would Google care about who is publishing what, where?

Who knows, but one thing is for certain – data is the most valuable asset on the web, and with literally hundreds of millions of webmasters eagerly signing up for Authorship, they have acquired some serious data (not to mention a LOT of backlinks ..*cough cough)

What they intend on doing with it now they have it, is anyone’s guess. But I don’t see how we, site owners and publishers have benefited from it in any way.

3. Google may want to start penalizing publishers, not domains.

Here’s a potential theory….and one that will surely have people leaving nasty comments lol, but….

Google must know (or at least let’s hope so) that they can’t keep slamming domains. For those of you who don’t already know, thousands (if not millions) of domains are being hit every day by penalties. Whether it be Panda, Penguin, Payday loans or whatever else. This over time, means more and more webmasters are either …

a)    Stuck with a penalized domain, which is rendered completely useless
b)    Dumping the domain completely and registering a new domain and starting over

When this happens, there’s collateral damage, which is of course, the domain name itself. Perhaps Google is smart enough to know that penalties might need to be applied to publishers, or actual site owners, rather than at the domain level?

If that was the case, penalties would follow site owners or publishers and not the domain.

In any case, I often wonder if penalties really should be applied at the domain level, because if I own a car and am caught speeding in it and lose my license, then sell it, why should the new owner be penalised for my wrong doings?

Actually, now that I think of it, Google made noise just recently about their domain name registrar service offering, so chances are they might be wanting to seduce webmasters with the whole “Register your domain name with us, and we will ensure any penalties are lifted for new owners”.

That’s a frightening thought, but it wouldn’t surprise me.

4. Google wants traffic to Google, not your crappy website.

Here’s an interesting question raised by a friend of mine, Peter…

So, what are the benefits of Google authorship in the search results? If anything, I see it as being a disadvantage because people have the opportunity of clicking through to my Google plus page, rather than my actual website.

This is a very interesting question, and a good one. Makes perfect sense doesn’t it? I mean, Google have conveniently place the link to their own Google plus pages, right beneath the actual URL of each site using it. Infact, the Authorship markup is barely noticeable – it’s in barely readable light grey text. For anyone that did accidentally click on it, chances are they would click straight back to the search results, then choose another site. 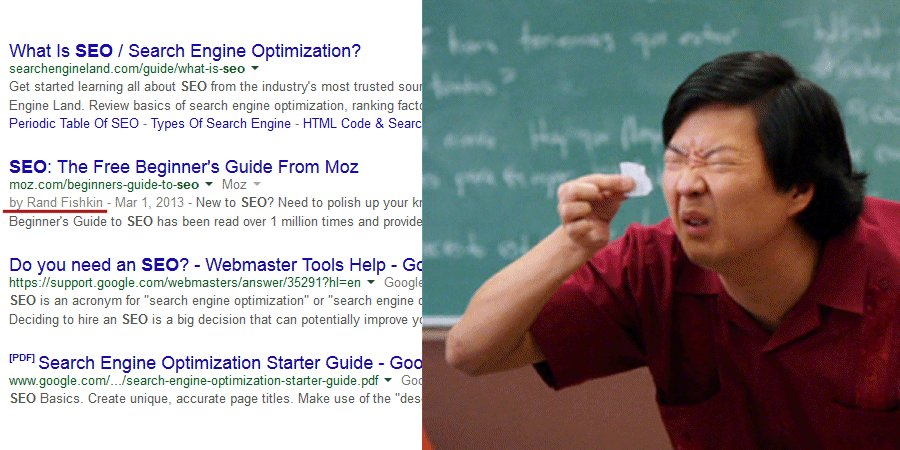 I think what really sucks about the whole thing is the fact that Google dumped publisher photos completely.

Everytime now I see Matt Cutts wearing that “I love webmasters” t-shirt, I feel like punching him in the face. If you love us, then why give us something that’s cute and fluffy, and makes us feel all important, then take it away?

That’s like an aunty coming to visit, handing over a cute toy, then coming back a year later and saying “Sorry, I know how much you loved this toy Johnny, but I’m taking this back”.

I don’t know about other site owners, but when I used to see my profile photo in the search results, it gave me a sense of pride, in that I knew people could easily find me, should they be looking. It put an actual face to my content.

It also changed my behaviour when looking through the results as often I would go straight to known, or trusted publishers – which is probably what Google didn’t like?

6. People can still steal your content and rank above you as the original author

I think if I was asked to summarise my feelings towards Authorship in one word, I would say …”underwhelming”. Authorship (at least I believe) had the potential to be so much more. It should have been a great way for site owners to better protect and take ownership of their own content, and promote themselves in search.

Instead, anyone can still rip off your content regardless, and republish it elsewhere on some crappy blog and outrank you. One question I often ask myself when it comes to Authorship now is….”What’s it supposed to do?”

Infact I used to get that question a lot from business owners and I would tell them, it shows your face in the search results, cool huh? (business owners love vanity driven stuff) Now what do I tell them?

Nothing, but let’s do it anyway, because everyone else is doing it.

Just like lemmings off the edge of a 200 foot cliff.

7. All your click through rates are belong to us

Here’s something else that site owners may have noticed, and that’s their click through rates being negatively affected due to the removal of Google authorship profile photos.

I would be confident in thinking that anyone working in a given space where they were the ONLY ones using it – that is, none of their other competitors were using it, are now losing traffic because there’s nothing in the SERPS to draw the eye to their listing. What’s the point of going to all the hassle of doing it then?

Hey look, I’m running Authorship! So what? Shut up.

8. Google are getting twitchy with Google Plus and a lot of people are talking

In the last few years, there’s been more Google products that I can remember.

Google plus this, Google plus that, Google sidewiki (remember that disaster?) Google Buzz, Google Wave, Google reader……geeze, there’ve been so many “Googly products” that I have trouble keeping up. Some stay, others get flushed….it goes on and on.

So why should Google Plus be any different?

Even though I’m a user of Google Plus, my level of interaction there is miniscule in comparison to the time I spend on Facebook, and to be honest, I wouldn’t be surprised if pulling Authorship is one of many small cracks to appear before the ship goes down.

Google Plus at the moment is like that faded green bedspread your mother gave you when you first left home back in 1991. Sure it’s warm, but it always makes you itchy and gives you hayfever whenever you drag it out, and it sure as hell doesn’t go with anything else in the room.

Personally, I think Authorship is an excellent idea, and one that can REALLY work. It makes sense, and has potential. I just wish Google would implement it in a way that helps webmasters. Tie it in with Webmaster tools. Get it OUT of Google Plus.

Allow site owners to add contributors to domains within Webmaster tools – not within Google Plus. Simplify the process of setting it up. Make it more meaningful.

And most importantly of all – tell us what the hell it’s supposed to do.

or fill in the form below

Want to have an informal chat about how I might be able to help you? Book a free 1 hr strategy session below.

Call are held via Zoom. You will need a camera and microphone.